Here’s what Edward Kealey has to say about the availability of doctors in 12th century England:

more valid [in comparison to dividing total population by total number of physicians] ratio of physicians to people can be obtained by measuring selected local areas. Totnes, for example, probably possessed only about six hundred individuals in 1100. If all three of its doctors were active at the same time and if they did not exclusively serve the gentry or the clregy, there was at least one physician available for every two hundred persons. Nearby Exeter, with an urban populace of around two thousand, would have a minimal ratio of one doctor for every one thousand citizens…seven of them [towns] can claim a ratio of roughly one physician for every two thousand people. (Kealey, Medieval Medicus: A Social History of Anglo-Norman Medicine, 47)

Seems like a huge ratio. How does it stack up against the modern world?

As it turns out, pretty well. Natural Resources Canada has this handy map of physician density in Canada: 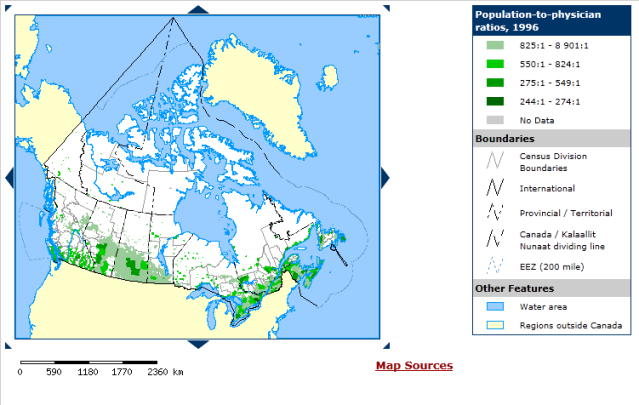 In Southern Ontario, where funds and population are at some of the highest rates in the country, the numbers are just as high:

Around Toronto, the ratio is between 650 and 1299 : 1. (A side note: I’m really impressed with the ratio in Kingston, of all places. My Kingstonite-med school friends should be proud, apparently.)

Now, I haven’t checked Kealey’s numbers, so I don’t know if there’s something off with his data. However, if he’s right, then the coverage of the population by physicians wasn’t bad at all. Now, it’s true that Canada is usually in the middle of a doctor shortage, but even so the ratio is plenty: although wait times are long for special procedures and regular checkups, I have never had to wait more than a week to see my family physician with serious problems.

It could be argued that technology makes this ratio less significant, but I doubt it. Most of the things I see my doctor for are procedures that require no technology beyond a stethoscope, which may make his assessment more accurate, but no faster. The things that we use technology /instead/ of a physician for, like for example self-diagnosis on the web, would have been replaced by traditional medicine (old wives’ tales) and family knowledge in the middle ages. Also insignificant is the general health of the population: we are generally healthier, but also more paranoid, and demand our doctors’ help with things, like the proverbial runny noses, that I’m sure a person living in the middle ages would have disregarded. On the other hand, I would assume a medieval person would probably have consulted physicians only with the most grave troubles.

How effective these medieval physicians were is, of course, another matter. Also unnacounted for is how the ratio changed through medieval England: so, while areas like Totnes and Exeter may have had many physicians, chances are that people living in predominantly rural areas would have had no access to a physician. Then again, Kealey is calculating based on the numbers of known physicians, but these were probably a tiny fraction of the actual number of physicians in England at the time.

So, all in all, at least the statistical coverage of healthcare in the middle ages was pretty decent, considering it’s par with a modern-day, free, first-world system.

(on an unrelated note: see, I posted on something non-Anglo-Saxon. So there!)